Why do we need medical Oxygen when we are injured?

Shock is a medical term used to describe the condition of someone whose blood pressure can not sustain adequate blood supply to all of the cells of the body. As a result a series of things happen to the body, some of which we see as symptoms of shock;
The blood pressure drops failing to deliver blood to the brain and extremities. This causes anxiety and the skin appears pale. The skin will also produce beady sweat. Arteries will also constrict causing the skin to appear pale.
The heart will try to compensate for the low B.P. by speeding up, but because the lack of normal levels of oxygen, the heart’s ability to pump efficiently has decreased to a level of weak inefficiency.
As CO² levels in the blood increase, the blood pH decreases adding to the weakening of the cardiac and respiratory output.

Shock can be caused by any one of the following conditions:
Hyper and hypo-thermal conditions, Asthma, Diabetes, Epilepsy and Seizures, Injury such as broken bones to bleeding, Stroke, Heart attack, Allergic reactions (Anaphylaxis), near drowning, Respiratory stress, and many more (consult training).Without high levels of Oxygen and the stabilisation of the cause of shock, the condition will get worse.

SHOCK WILL BE FATAL IF NOT CORRECTLY DIAGNOSED AND TREATED WITHIN ONE HOUR OF ITS ONSET. THE HOUR IS OFTEN CALLED THE GOLDEN HOUR AS WITHOUT SUFFICIENT TREATMENT WITHIN THIS FIRST HOUR, MOST PATIENTS WITH MILD TO SERIOUS INJURY WILL MORE THAN LIKELY DIE AS A RESULT OF SHOCK FROM THEIR INJURIES, AND NOT THE INJURY ITSELF

Oxygen can be used to enhance the Rescuers ability to promote recovery.
How ever! The skill and equipment necessary to deliver oxygen ranges from minimal to extensive

We stock a full range of Oxygen therapy equipment 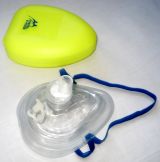 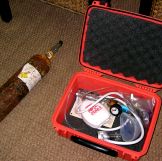 When someone needs Oxygen, it makes no sense to use unsterilized, old equipment where infection is very likely to be the outcome they are kept in Hospital for. ALL OXYGEN DELIVERY MASKS SHOULD ONLY BE USED ONCE ONLY!!
Pacific Medicare understands this as well as the South Pacific. That is why we automatically equip all our Major Trauma Packs with back up equipment. Our prices are not at all prohibitive.